Discover the new generation of workshops designed for hybrid work!
Join a workshop
Talk to Sales

Le Prêt-à-Former - I am writing this article after attending a presentation of the « Klaxoon » box. Although I'm a technophile and a pre-digital native, I am particularly demanding when it comes to the user-friendliness, simplicity and toughness of tools for trainers. So, it's pretty rare for me to be so impressed by a solution as soon as I see it. But I think that Klaxoon has (pretty much) understood what trainers are expecting at the start of the XXIst century. 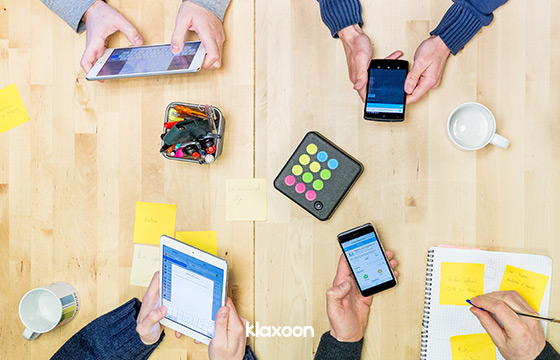 Get template for free

In general, trainers are pretty hesitant when it comes to introducing technology into the room, which is perfectly understandable. The slightest little hiccup could put them in danger with their trainees, disrupt their teaching plan and ultimately waste time instead of save it. Everyone who's ever been in this situation knows how dangerous and unpleasant it is. So, why is the Klaxon box generating so much enthusiasm with trainers? Over the last 20 years I've seen and used dozens of technologies which were supposed to provide trainers or speakers with new ways to present and interact with participants. And that's without mentioning the disastrous PowerPoint + video projector combination! But what has been most representative of "in room" teaching tools until now has been how complex they to implement and how fragile they are, even for proper geeks. Let me explain: there's always been one fly in the ointment to interfere with a presentation: lack of bandwidth, no WiFI code, trainees who are poorly equipped or who have incompatible equipment, software or keys to install before you even start and more. When it comes to kitting out permanent training rooms, the hardware solutions required initial investment followed by recurring maintenance costs. This meant solutions which were too expensive for external trainers or for temporary training rooms. For example, I am thinking of the prestigious operations by Conseils Généreux(!) which have generated fortunes for people selling laboratories, audio visual equipment, interactive boards and so on. Or voting unit systems, which are quite simple to set up once they can run on WiFi but which remain expensive to use. But unfortunately they are still extremely simplistic: they offer closed Yes/No, multiple choice and other questions and so only allow very poor interaction with the room. They're practical for very quick surveys in large groups, but they don't enable participants to go very far in expressing what they think (they are also very tempting manipulative tools). Their online version (ARS- Audience Response System see this tag) is much cheaper but requires excellent bandwidth.

How can we deal with Greek theatre constraints: time frame, action and location?

There is a paradox between providing training in real time and the need to hold onto content to be able to distribute it later. One further paradox: today, worldwide organisations need to roll out their information and training at the same time at different locations in France or around the globe. How can they guarantee that the presentation will go successfully in the main room and at the same time push back the walls of the room for online participants from other locations?

I feel that Klaxoon's solution provides a large number of responses to different issues. It is even more surprising for a technology which, according to Mr Leriche, has only been marketed for not even 9 months, to see the relevance of the features offered by this magical little box. It has been able to control the different little problems that I mentioned above and builds into its software clear long experience of techniques for presenting to small groups of adults.This certainly explains the extremely quick success that the Klaxoon boxes have had with trainers, large companies' training centres and now with training organisations. I think that it is because Klaxoon is providing a XXIst century solution which is ideally adapted to 20th century training. Why? First of all, because it has enhanced presence-based training methods without modifying the current structure. But not just this: this gifted box enables presenters to increase interaction with and between participants, which should be the objective of every adult trainer. Then isn't the most important lever for adoption a psychological one? Klaxoon makes the trainer the most important person in the room. I think that this has been the problem until now: for example, e-learning programmes in the early years of the 21st century were designed with self-training in mind and didn't leave any room for trainers. Trainers felt excluded and rejected this new system which left them on the sidelines; they didn't think that this was actually training (and they were often right). Finally, Klaxoon is an effective way to increase the size of groups of participants and productivity along with it. On the one hand, this is because it enables large groups to interact with each other, whereas with current systems it's hard for trainers to go beyond a dozen people. On the other, Klaxoon's WiFi technology enables current slides or the results of interactions to be projected directly onto the participant's tablet or PC. Even if they are at the back of the room, have forgotten their glasses or are in another room on the other side of the world.I won't list all of the Klaxoon box's features in this article. I'll simply summarise by saying that the trainer has a master-tool to:

And for once, cock-a-doodle-doo, Klaxoon has been 100% produced by French teams, split between Lyons and Rennes, the head office of the Regards group which is run by Matthieu Beucher, a Rennes-based company which specialises in innovative content and new interfaces.

Get template for free

Use template for free